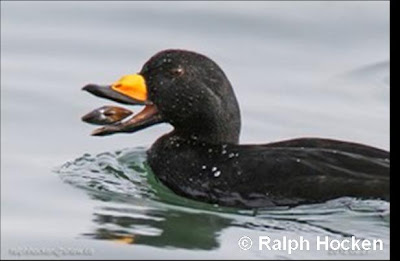 Seaducks? Yes, there are also ducks in the sea, not only in your local lake! And what do they eat? Clams and other shellfish - but no, not exactly as you are just thinking:

... but indeed the same ones that we humans enjoy eating. And one problem with similar resources is that, once a forager takes them, they get depleted! So, how to forage for similar resources? Vincent will address this question using a population of seaducks living on the northern coast of France as study system. Here's a summary from Vincent of what he will show us this week:

Understanding distribution rules of foragers in their environment is one of the main topics of behavioural ecology. For predators that prey on non-renewable resources, depletion (i.e. the simple removal of food that other individuals can consume) is a likely mechanism driving population distributions. Since two decades, spatial depletion models (SDMs) have been developed to predict effects of resource depletion on predator distributions. These models commonly predict that predators should first exploit the richest patch, and include other patches when they become as profitable as previously depleted areas.

SDMs can help determining how the distribution should change in response to resource depletion, and can provide a reference over which more complex distribution rules (e.g. density dependence) can be tested. We located groups of common scoters Melanitta nigra foraging on benthic communities on a French coast used as wintering areas. We first tested if simple “Ideal Free” SDMs can explain theirs seasonal distribution dynamics between and within large ranges (areas of several dozen of km²). We tested such models for different combination of prey type and determined how much the model/data matching can be explained by density variations.

And here also a cool GIF of Vincent's model predictions:

Email ThisBlogThis!Share to TwitterShare to FacebookShare to Pinterest
Labels: Talks

Welcome to the AgriPop blog, written by members of the AgriPop group at the Centre d’Etudes Biologiques de Chizé (CEBC), France - a CNRS and INRA research centre.
We are broadly interested in understanding and managing biodiversity in agricultural landscapes, including the interface between ecology and human behaviour.

A large part of our research is done in a long term study area close to our centre, part of the network of LTER Sites and Zones Ateliers.

We will post here mainly adverts about our lab talks - held every Friday @ 11:30 - journal clubs, and our work. But we might also discuss papers that capture our interest.

Books and book chapters by us